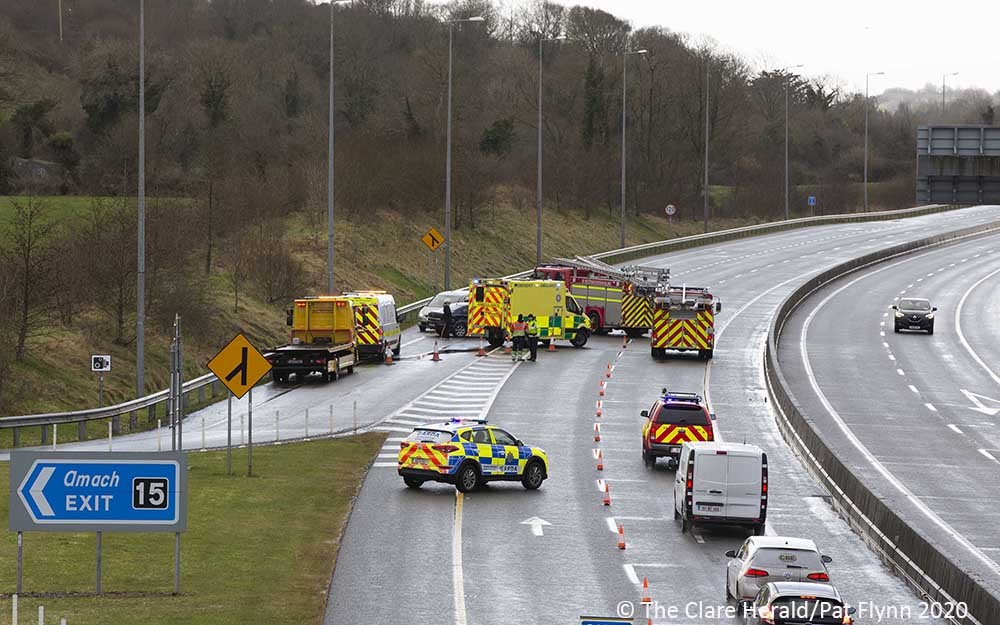 The tail-end of Storm Ciara continued to cause damage and wreak havoc on the roads yesterday as much of the country remained under wind, snow and ice alerts.

Emergency services dealt with multiple collisions on the M18 in counties Galway and Clare while Clare County Council was forced to close a large section of the promenade and carpark in Lahinch because a lifeguard station suffered structural damage.

Hail and sleet are believed to have been the main cause of a number of collisions on the M18 yesterday.

In the first incident, at around 10.30am, two cars spun out of control close to junction 15 at Crusheen. Units of the fire brigade from Gort, Co Galway and Ennis in Clare responded to the incident along with National Ambulance Service paramedics and Gardaí. No one was injured in that incident.

Later, fire crews from Gort and Loughrea were supported by colleagues from Ennis station as well as ambulance paramedics and Gardaí, at an incident on the M18 near Kiltiernan. A car left the road, overturned and collided with an SOS roadside emergency telephone. The driver of that vehicle also escaped uninjured. 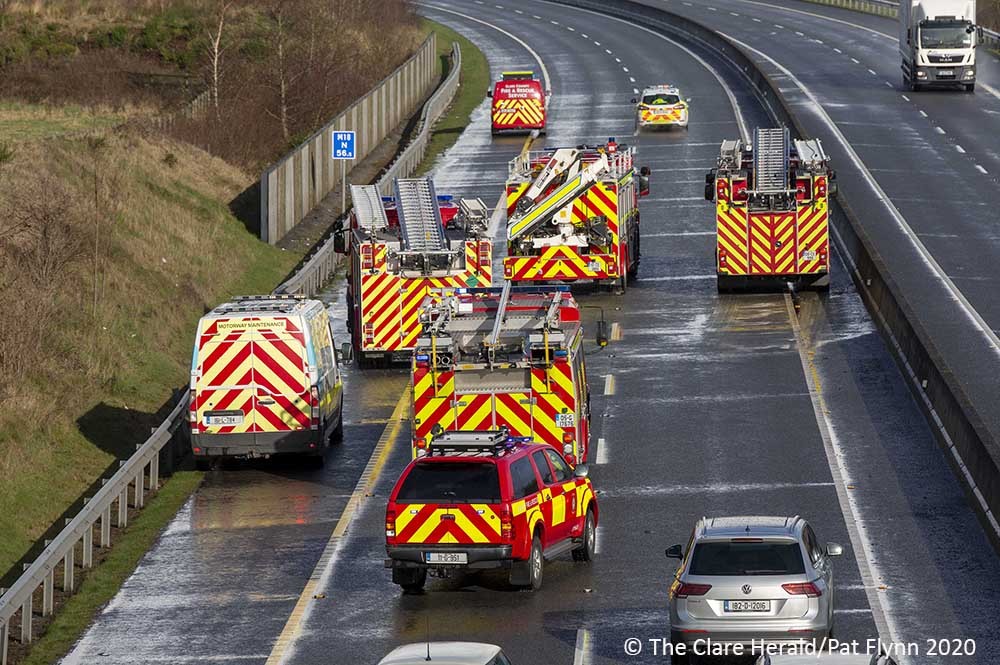 At around 2.00pm, a car spun out of control and struck the central crash barrier on the M18 at Ballyline between Barefield and Crusheen. The motorway was closed for almost an hour while emergency services dealt with the incident. The car’s fuel tank was ruptured in the impact and contaminated the road surface. The driver was not injured.

In North Clare, a van was blown off the road on Monday after the driver was taken by surprise by a wind gust. 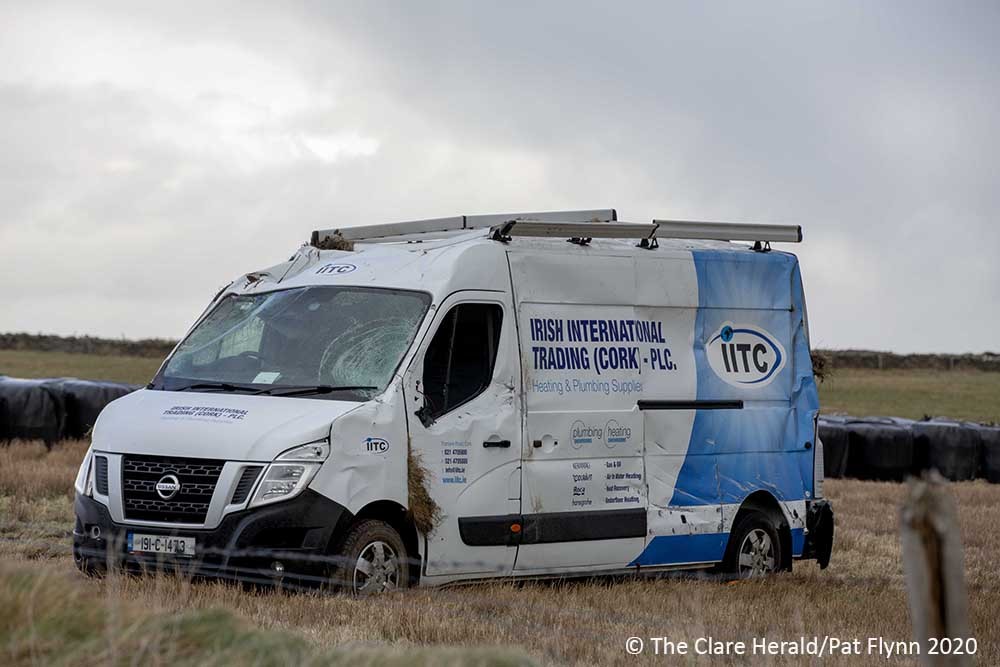 The man had a lucky escape in the incident which occurred on the R478 road close to the carpark for the Cliffs of Moher. The road is about 700 feet above sea level and prone to being affected by high winds.

The company confirmed that the driver was the only occupant of the vehicle and was not hurt while a spokesman also thanked a local farmer who rendered assistance to the man.

Elsewhere in Clare, a large section of the promenade walk and carpark at Lahinch was closed because of concerns over structural damage to a lifeguard station. High winds on Monday night are believed to have dislodged part of the building’s roof. 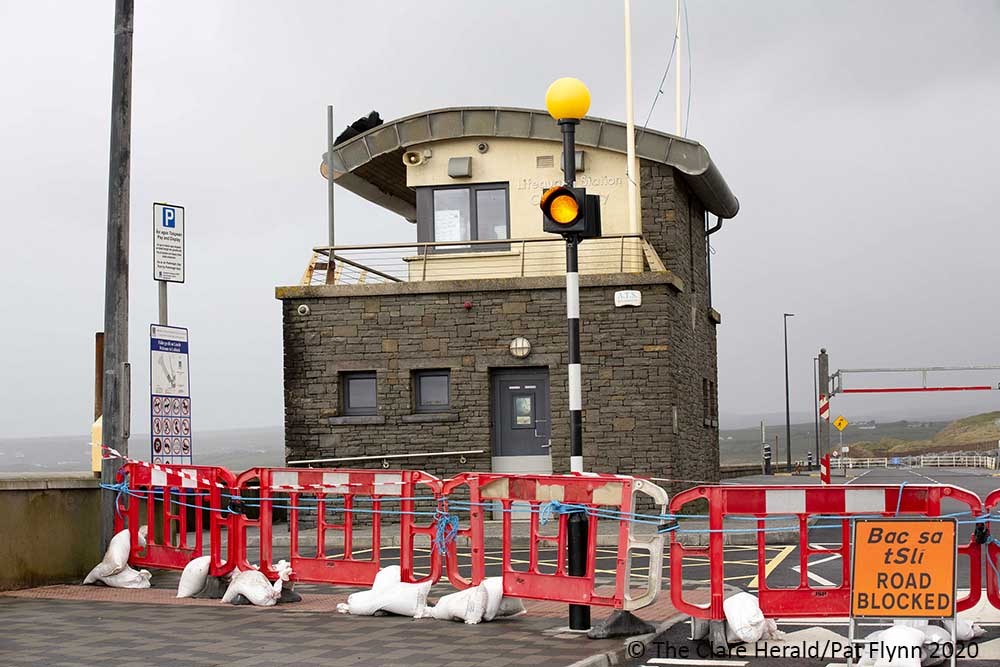 Locals reported that winds in the area on Monday night were “as bad if not worse” than at the height of Storm Ciara on Sunday.

Further north at Doolin, the main carpark at the local pier was extensively damaged with tonnes of rock being washed up from the shoreline. The carpark had been cordoned off and closed after suffering similar damage earlier this year and late last year.