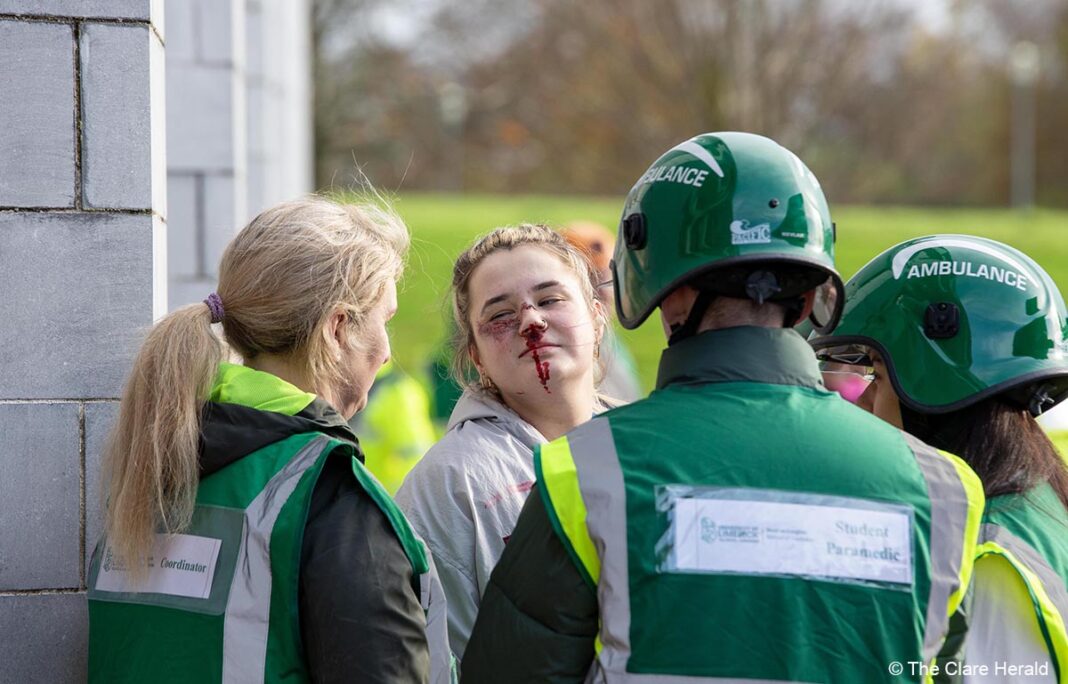 A simulated Major Incident Exercise created a stir on Thursday on the University of Limerick north campus as Paramedic Studies students.

Personnel from Limerick Fire and Rescue Service, National Ambulance Service and the Explosive Ordnance Division (EOD) of the Irish Defence Forces (bomb squad), An Garda Síochána responded to a highly realistic training exercise. Volunteers from Limerick and Clare Civil Defence acted as casualties for the exercise.

UL paramedic, nursing and medical students took part in managing the scene and providing emergency assistance to those involved.  The training exercise included a badly damaged vehicle with trapped occupants and a fire starting in the engine of the vehicle.

There was a large number of people who were injured in the incident area with various levels of injury and in various levels of distress. There was also a box with wires sticking out of it obvious on the ground approximately 25 metres from the car. Members of the Irish Defence Force’s Explosive Ordnance Disposal (EOD) team carried out a control explosion on the mock device.

The UL students, while aware the exercise would take place, were unaware as to what the scene would entail and so were reacting to the exercise as it unfolded.

Frank Keane, Senior Clinical Teaching Fellow on the BSc in Paramedic Studies, explained that the outdoor exercise featured a “terrorist scenario”.  “We have a specific way of teaching that involves the concept of problem-based learning,” he explained of the course, which was the first undergraduate paramedic programme in the country when it was launched in 2016.

“We wanted something that would be of value to the students and one of the areas they have to be conversant with is a paramedic response to a major incident. This is a terrorist scenario, where someone has driven a car at speed into a crowd of people before crashing it. There is also a suspicious package near the car and we are mimicking the actual response to this situation.”

A total of 19 students on the BSc in Paramedic Studies responded to the simulated major terrorist event of a car crashing into a group of people.

“The students had five patients in really bad shape and had to prioritise one of them to go on the helicopter, so that requires a judgment call. “It is about preparing students to face this kind of situation in real life,” said Mr Keane.